The Norwegian Poison Information Centre (22 59 13 00) is unable to identify plants, but it can attempt to exclude the most toxic umbellifers with your help.

Umbellifers belong to a large family of plants (Umbelliferae sp.) which includes edible species such as wild celery, carrot and parsnip, as well as the highly poisonous species cowbane or northern water hemlock, fine-leaved water dropwort, poison hemlock and fool’s parsley or poison parsley. It is therefore very important to be able to distinguish between the various umbellifer species, even though this can often be challenging.

The species in the umbellifer plant family (Umbelliferae sp.) cover everything from relatively small plants up to plants four metres tall. They can be annual, biennial or perennial. There is a wide variation in toxicity within the umbellifer family. Some are plants are edible and used in food, while others can cause fatal poisoning, even in small doses. However, in terms of their appearance, there are some recurring characteristics:

Involucel and involucre: Below the umbels, there is often a wreath of leaves. Depending on whether it is below a compound umbel or a secondary umbel, these wreaths are known as involucre or involucel.

The flowers are small, five-pointed and, in most species, white, although other colours do occur (yellow, reddish, greenish).

The most poisonous umbellifer plants in Norway

The umbellifer family is a large family comprising just under 3,000 different species. In the event of an accident involving this plant family, it is important to exclude the most poisonous species. There are more harmless umbellifer species than highly poisonous ones among the Norwegian flora.

In Norway, we have four potentially highly poisonous umbellifers: cowbane or northern water hemlock, poison hemlock, fool’s parsley and fine-leaved water dropwort. If you have ingested an umbellifer plant, you must exclude these species.

One way of telling the various species apart is to look at the different characteristics of the species. Cowbane and fine-leaved water dropwort grow in damp environments, while poison hemlock and fool’s parsley grow in dry areas. The presence of compound umbels and secondary umbels can also be used to distinguish the species from each other. Below, you will find additional information that can help you to exclude the most poisonous umbellifers.

​​Cowbane (Cicuta virosa L.) is one of the most poisonous plants in the Norwegian flora. All ingestion of plant parts is considered to be potentially dangerous and should be assessed at a hospital immediately. Cowbane contains the poison cicutoxin, which among other things can cause convulsions, and fatalities have been reported. If you are certain that you have ingested this plant, you must therefore call 113 for emergency medical assistance.

Umbel: Has secondary umbels, but no compound umbels.

Root: Divided into chambers, with sap which turns yellow-orange when the root is cut.

Habitat: Bog, pond/lake edges, marsh, ponds and small lakes, damp ditches. Grows from south to north in Norway, but has not been observed in all counties.

Similar species where there is a risk of confusion: Wild angelica

Fine-leaved water dropwort (Oenanthe aquatica (L.) Poir) is rare in Norway. According to the species database (in Norwegian), it is only found in a few places in Østfold and Vestfold, and poisoning cases with this plant are therefore almost always excluded.

You can see more images of fine-leaved water dropwort here.

Umbel: Has secondary umbels, but no compound umbels.

Flower: White. The umbel is positioned on the side of the stem, opposite the leaves.

Leaves: The outline of the leaf is triangular.

Poison hemlock (Conium maculatum L.), or hemlock as it is also known, is another of the most poisonous plants in the Norwegian flora. The whole plant is poisonous. All ingestion must be assessed at a hospital, as even small quantities can cause severe symptoms. You must therefore call the medical emergency number 113 if you are certain you have ingested this plant.

Umbel: Has both compound umbels and secondary umbels.

Scent: May have a rotten, bad odour when leaf or stalk is crushed.

Habitat: Fields, road verges, urban weeds, wasteland. From the south of Norway up to and including Trøndelag.

Similar species where there is a risk of confusion: Cow parsley

Fool’s parsley (Aethusa cynapium L.) is a poisonous plant, which when ingested in large quantities may result in the same poisoning as poison hemlock. Relatively little information is available concerning the toxicity of the plant in the literature. Cases of severe poisoning and even fatalities are mentioned in older literature, but there appear to be no recorded cases of poisoning by fool’s parsley in modern times.

If you accidentally ingest this plant, you should call the Norwegian Poison Information Centre (22 59 13 00) for advice on what to do.

Flower: White. The outer petals are often larger than the inner ones.

Habitat: Fields, road verges, urban weeds, wasteland. From the south of Norway up to and including Troms.

Similar species where there is a risk of confusion: Cow parsley

Other information about umbellifers

There is a wide variation in toxicity within the umbellifer family. Another problem with some umbellifer species is that they are phototoxic, i.e. they can cause a skin reaction upon exposure to ultraviolet radiation. 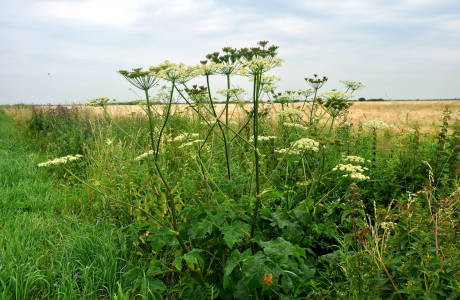 Phototoxic reactions are caused by substances which damage the skin if they are exposed to natural or artificial sunlight when in contact with the skin.

Contact the Norwegian Poisons Information Centre if you suspect a poisoning

The phone service is open 24 hours a day.

In case of severe symptoms call: