During childbirth, situations can arise where the obstetrician has to help you give birth to your baby using forceps or a ventouse.

When do a ventouse or forceps have to be used?

Situations can sometimes arise where the baby has to be helped out more quickly than if you were to push out the baby yourself:

Situations can arise where you need assistance in order to push out your baby, e.g. in the event of:

After examining you, the obstetrician will decide which type of childbirth method would be best for your and your baby.

- also known as a ‘vacuum cup’. This is a metal or rubber cup which is attached to the baby’s head by suction. The obstetrician may help to pull your baby down your vagina while you push.

After the delivery, the baby will often have a mark and/or swelling on its head where the ventouse was attached. This will disappear quickly, but some babies can also develop a bruise, which will disappear gradually within a few days.

Forceps, which look like large spoons or tongs, consist of two identical arms which are curved to fit the baby’s head. The arms of the tongs close around the baby’s head without actually closing against the head. When the tongs are in position, the obstetrician will pull the baby down through your vagina while you push.

There are various types of forceps. Forceps are also used for breech births in order to help the baby’s head out. After a forceps-assisted delivery, red marks will often be visible on the baby’s cheeks. These will disappear rapidly after the birth.

It is sometimes not possible to deliver a baby even using a ventouse or forceps. A caesarean section will then be necessary. 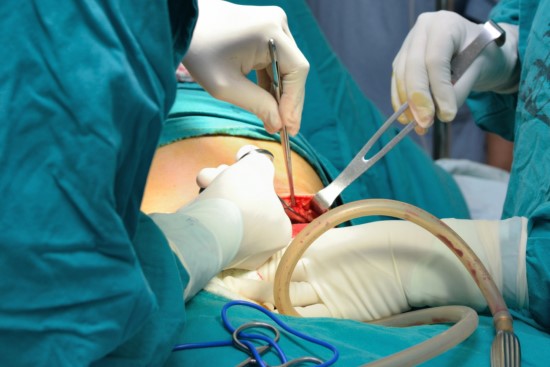 Caesarean section can be performed either as a planned operation or as an emergency procedure.

Information about pregnancy, childbirth and the postnatal period in Arabic, English, Farsi, French, Norwegian, Polish, Somali, Tigrinya and Turkish aimed at immigrants and others with a short period of residence.